A Note from Kelly King: In recent years, we have made much ado about mentoring—like it’s something we just decided to implement in the church. But mentoring isn’t new; every woman since the beginning of time has needed other women to teach her how to navigate life whether it’s about becoming a woman, getting married, or raising children. Most importantly, we need women to mentor women by teaching them how to study God’s word and apply it to their lives. I have a feeling many of you will relate to Cynthia Hopkins today as she shares her struggle with being a mentor—the M word.

I didn’t want to be a mentor.

Now that I type it out like that, it’s kind of funny. I’ve been teaching and leading for as long as I can remember. I’ve written Bible studies, devotions, and articles, spoken at numerous women’s and youth events, taught Bible study classes, and am married to a minister. But when 28-year-old Cassie asked me to be her mentor, I scowled. Not on my actual face, because that would be rude. But on the inside I felt a similar expression to the one Michael Phelps wore when he was caught on camera before swimming in the Rio Olympics, minus the headphones and rap music.

The word itself was my hang-up. To me, mentor equaled old, and I wasn’t ready to be one of the older women Paul wrote about in his letter to Titus. Had she read that verse and thought of me? I was horrified.

I couldn’t in good conscience turn down her request, though, not with such a flimsy argument. So I agreed, on the condition we wouldn’t use the m-word. We had to call it something else. Quickly, and without even consulting Urban Dictionary, Cassie suggested frientor, and I felt better about the whole thing.

That conversation and relationship did prompt further inner thought, though. Probably anytime you find yourself trying to force your face to not show the disdain you feel about a thing, you should take some time to figure out why. And even more important than finding out why is to find out what God wants you to learn.

I realized I had some faulty notions about mentoring. Here’s what I’ve learned since that day.

Mentoring should happen organically. Mentoring is kind of a buzzword in church life these days. But what it is, at its core, is simply disciples making disciples as they do life together. We tend to think of it as a formal program of the church. There is undoubtedly great value in having formal mentoring programs in place. They help women make cross-generational connections that would otherwise be difficult to make. At the same time, we shouldn’t rely on programs entirely. The fact is, Cassie and I were already in that type of relationship, even before we gave it a name. On the same day my husband began his job as associate pastor of our new church, Cassie visited for the very first time. I noticed she had that “I’m new here” look on her face, because I had it on mine, too. I asked Cassie to sit with me, and that began a relationship that continued to grow and deepen. So when Cassie asked me to be her mentor, it was entirely natural. No one had to pair us up from a list; God had put us together for a reason, and we both knew it.

Mentoring isn’t an option. What I’m saying is you don’t become a Christian and then think about whether or not you want to sign up to make disciples, be mentored, and mentor other believers. You sign up for that when you decide to follow Jesus. It’s part of the process of discipleship for every believer, regardless of age. You should be pouring yourself into other people, mentoring them, and making disciples. There should be people you’re letting pour into you, mentoring you, and helping you along in that process of discipleship. Scripturally, that extends beyond your immediate family to women of all ages in your church. (See Titus 2:3-5, Prov. 27:17, and Ps. 145:4.)

Mentoring should be part of the culture of your women’s ministry. It should be an expected part of church life, visible among females of all ages. That means we need to plan events that encourage intergenerational connections. It means we should be looking to meet people outside of our Bible study classes or small groups that gather according to life stages. We should be asking the questions, “Who are you mentoring?” and “How are you doing that?” And when people see us at church and women’s events, they should see us sitting with and talking to different people, not just the same few best friends. That way, when this next generation of women get asked to mentor someone one day, they’ll know what I didn’t know then but am so glad to know now—to be thought of in that way is something to smile about. 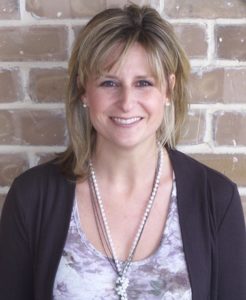 Cynthia Hopkins is a writer, speaker, and the founder of Platform 320, a nonprofit ministry for women. Cynthia has been writing articles, Bible studies, and devotions for LifeWay for almost 20 years. She is the author of “What Now?” a 30-day book of devotions to help teenagers own their faith after the spiritual high of a camp or retreat experience. Through Platform 320, she leads multi-church women’s retreats, ministry wives retreats, and women’s mission endeavors. Her husband, Clay, is the associate pastor at their church, FBC College Station, TX. They have two young adult children, Brandon and Abby.