A Note from Kelly King: There are three words I generally use when I talk about the priorities of ministry to women—encourage, embrace, and echo. As leaders, we encourage women, we teach them to embrace Christ, and the result is echoing God’s heart for the world. In today’s article, Courtney Veasey shares her personal reflection on what it means to be God’s echo to those we encounter.

From the moment he came into this world, my nephew, Nolan, and I have shared a special bond. He was the first infant I ever drove in my car with by myself, where I frequently crawled in the backseat while stopped at red lights to lay ear to his chest to make sure he was breathing. With his own little personalized jersey, Nolan was team mascot and cheerleader for my college volleyball team. And nothing nearly halted my move from Florida to California for graduate school as did the flood of tears he shed at my leaving.

One particularly special moment with my nephew took place several years ago when I was having dinner with my family at a restaurant just after my return from spending time in China. At one point during the meal I went to use the restroom, and of course my little shadow—at that time nearly four years old—had to come along. Having heard me talking about my time and adventures in China, on the way to the restroom Nolan declared that one day he would come with me to another country. I assured him we would make those kinds of trips together, but I was clear in telling him that most of the time when I go to other countries, it is to tell people about Jesus. So if he did come with me that’s what we would be doing. The subject changed but the thought of going to other places to share about Jesus must have stuck in Nolan’s little mind. Minutes later, while washing his hands, he said, “JoJo, when we go to other countries to tell people about Jesus, how about YOU tell them about Him, and I will be your echo-o-o-o,” spoken with hand cupped by his mouth, whispered sound effect and all. Laughing with joy I asked what he meant by being my “echo.” He said, “Well, you tell them about Jesus, and I will listen to everything you say, and then I will just tell them again what you said. Then they will hear about Jesus twice.” Honestly, I can hardly reflect on this memory now without tears as that moment was so profound in my life and ministry. For right then the Lord whispered to my spirit, “That’s all I’m ever asking you to be—My echo—to tell others of what I have already said in My Word.”

The opportunity to tell people again what God has already said—to be the echo of the Almighty—is really what we’ve been given to do in whatever capacity of ministry our Lord has placed us. The task is simple really, and yet sometimes we make it so hard and so very complex and complicated as we try to create or keep up with the spiritual equivalence of the Joneses and their latest and greatest models of leadership and ministry. I don’t know about you, but I’m unnecessarily tired—mostly mentally and emotionally—from spending more time being something other than simply God’s echo. And to be His echo means that we must first listen to what He has said. So here are a few verses from Scripture to refocus our attention when it gets off track, and to hear some of the life-giving words we are to be echoing to others:

“Lord, You have treated Your servant well, just as You promised. Teach me good judgment and discernment, for I rely on Your commands. Before I was afflicted I went astray, but now I keep Your word. You are good, and You do what is good; teach me Your statues.” —Psalm 119:65-68 (HCSB)

“The grass withers, the flowers fade, but the word of our God remains forever.” —Isaiah 40:8 (HCSB)

Jesus said to her, “I am the resurrection and the life; he who believes in Me will live even if He dies, and everyone who lives and believes in Me will never die. Do you believe this?” She said to Him, “Yes, Lord; I have believed that You are the Christ, the Son of God, even He who comes into the world.” —John 11:25-27 (NASB)

“Let your gentle spirit be known to all men. The Lord is near.” —Philippians 4:5 (NASB)

May we ever be His echoes, simply telling again and again the lasting, binding, authoritative words which our God has spoken. 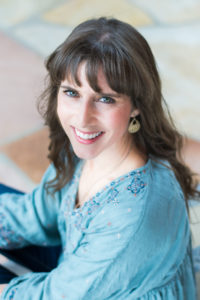 Courtney considers the places she has lived, the ministry she has taken part in, and the people she has met along the way to be some of God’s greatest gifts to her. A native Floridian, Courtney has also lived and served in various ministry positions in South Carolina, Northern California, and currently Louisiana where she is a member of the faculty and Director of Women’s Academic Study Programs at the New Orleans Baptist Theological Seminary. Aside from her many affections in life (family, Florida State football, travel, music, etc.), Courtney’s greatest passion is to love and serve God and His people through the teaching of His living Word.