A Note from Kelly King: As leaders, we can quickly get caught up in the pride of having a position or receiving validation because of something we’ve accomplished. But what happens when all of that is taken away? Today, Kasey Ewing shares a personal story of remembering that the only thing we need is Jesus. Remember, we do not serve the Lord because of the benefits He provides. We serve Him because He is God.

When I was 19 and in my freshman year of college, I was an unwed pregnant mom. This was before teen pregnancy became a sensation, and there were no reality shows to glamorize it. It was just an awful time in my life. Period. A life of sin had caught up with me.

I was feeling particularly vulnerable and just plain ugly so I decided to visit the beauty salon and get a new do. Only it didn’t turn out the way I wanted. I was going for the Meg Ryan look back when she was cute and her hair stuck up all over. It turned out black and too short. I looked more like Elvis than Meg. It was awful. I was 19, pregnant, very round (fat), and had horrible hair. The hair almost put me over the edge. But then God intervened on my behalf and taught me a lesson I hope to never forget. I had lived a life of rebellion, and God was stripping away everything I held dear or relied on for my security. Everything but HIM.

I had already lost my reputation, my youth, my figure, and now I had the worst hairdo ever. I felt like I lost everything. However, God showed me in the loss of all the temporal things that I had gained the one most important thing—JESUS.  I realized that when I was stripped of everything, He was more than enough.

I am so thankful He taught me this when He did. Little did I know that the stripping of everything I held dear to me would in fact prepare me for the greatest loss I have ever experienced. A few years later, our son died, and I again felt that I had been stripped to the core. But I had been a given the gift previously of knowing beyond a shadow of a doubt that Jesus is enough. I was heartbroken, but I knew deep down that I had a Savior to rely on.

This week I was there when a friend had to shave her head because of chemotherapy. I watched as the hair fell to the ground and remembered the day I felt like God was shaving me of everything I held on to. I watched as God did the same thing for my friend. I watched her grasp the beauty of who she is in God. I watched as she was transformed from the inside out. I watched as she realized in that exact moment that God is enough; He is all she needs. She doesn’t need hair. She doesn’t need anything but Him. It was one of the most beautiful things I have witnessed! I was honored to stand there while she was transformed into the most gorgeous woman radiating His love inside her I have ever seen. I was speechless. I watched as God gave her a precious gift. He showed her that no matter what we encounter in this life, He is enough. 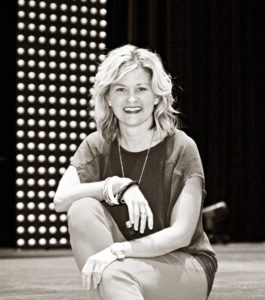 Kasey Ewing is the Family Ministry Director at New Vision Church in Murfreesboro, Tennessee. She is married to Brad who is the Buchanan Campus Pastor at New Vision. They have three boys: Drew, Jake (in heaven), and Jackson.