A Note from Kelly King: I love how God teaches us through creation. We can praise Him for majestic mountains and ocean waves. Chris Adams, who is officially retiring from LifeWay Christian Resources at the end of the month, shares some things she learned on her recent anniversary trip to the beach.

Last fall I wrote an article called Leadership Lessons from the Beach following our fall beach vacation to the Gulf coast. We went back to the beach in January for our 46th wedding anniversary. As we were walking together on the beach, I found more shells than I’ve ever seen on Florida’s east coast Amelia Island. A storm had blown through the day before and brought many shells in the tides the following days.

I was in heaven, of course, since this is my favorite beach activity! But as I was collecting and throwing back small or broken shells, I remembered lesson two from the article above. I have shared that lesson in a devotional a few times because of it’s impact on me.

Here was that lesson I wrote about in that article: Remember God uses the broken to serve Him. I love collecting shells and sometimes spend hours walking and looking for the next treasure. But as I do, I tend to throw back the normal, small, or broken ones in hopes of finding a big, whole shell.

As I did that this year, I was reminded that God never throws back the small, broken, or ordinary person. In fact, those are the very ones He uses as they choose to follow Him. They are the ones you may be seeking to lead and disciple. Remember that the quiet or fringe or broken woman is just as useful to the work of the Kingdom as the confident and able woman. Watch for the unlikely to connect with, get to know her story, and then find a way to connect her with others. Then watch for places God might have her tell her story or use her abilities to serve Him (John 8:3-11).

But in January God revealed something else me to as I was thinking about this earlier lesson that took the meaning much deeper: even though God never throws us back because we are too small, broken, or not rare enough, it is up to us to allow God to do the healing and restoration He wants to do in our lives.

We get to decide whether or not to allow God to do the work in us that we need. It won’t make us perfect, of course, but it shapes our character and allows us to become useful to Him. You can see in the photo below of three shells. One is beautiful and whole, one is almost perfect, except for the big hole in it. The third is very worn from the waves beating it, but don’t miss the character of this shell.

Romans 5:2-4 tell us that, “We have also obtained access through Him by faith into this grace in which we stand, and we rejoice in the hope of the glory of God. And not only that, but we also rejoice in our afflictions, because we know that affliction produces endurance, endurance produces proven character, and proven character produces hope.”

Out of the character He is building in us comes hope! Leaders, as you allow God to touch your broken, unfulfilled, defeated places, His hope will flow out of you and into the lives of those around you. As you lead through affliction with hope, others gain hope in their broken places. But this is a choice we get to make. We can put on the “I am fine” front and look like a beautiful whole shell who is staying as just an unhealed broken shell, OR we can allow God to take the broken places and build character. 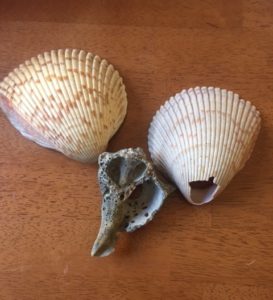 I’m not sure which of these you think is most beautiful, but I choose the one with character. There’s just something about what this shell has been through that makes it the most beautiful to me.

This year will you CHOOSE to allow God to work in your brokenness and bring character so that you can be a living example of the hope of Christ to those you lead and serve?